Visit The smarter E South America2022 with your delegation.

The number of jobs generated in renewable energy projects worldwide reached 12 million in 2020. This number is 500,000 more compared to 2019, according to the eighth edition of the report Renewable Energy and Jobs: Annual Review 2021 by IRENA and ILO.

Agrophotovoltaics (Agri-PV) refers to a process for the simultaneous use of land for agricultural (Agri) purpose and photovoltaics (PV) energy production. It is a symbiosis process that increases the efficiency of soil use, as it maintains fertile land for agriculture and, at the same time, allows the expansion of photovoltaic energy generation.
Agri-PV systems covers a spectrum that ranges from the cultivation of special and intensive arable crops, with special PV mounting structures, to extensive grazing, with marginal adjustments on PV structures.
Agri-PV technology have been developed in recent years and has spread to almost all regions of the world, increasing from 5 MWp in 2012 to approx. 14 GWp in 2020, with systems installed in Europe, Japan, China, USA and most recently Korea.
Brazil has a strong agrobusiness; is the fourth largest agricultural producing country in the world, the main producer of coffee, sugarcane and citrus, and the second-largest soybean, beef and poultry producer.
In this webinar, Prof. Trajano Viana will shed a light on the possibilities of Agri-PV for Brazil as a major agricultural power and the strongest economy in South America. 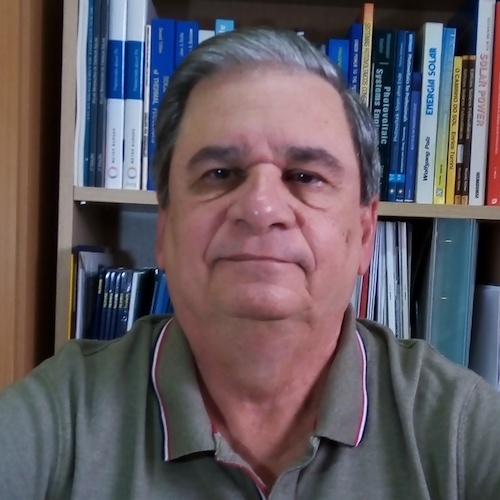 Trajano Viana is the Director of TrajanoViana.com, where he has been active on several consulting jobs and projects, in addition to teaching dozens of training courses on photovoltaic energy. He has been a Professor of Electrical Engineering (1987–2014), a Visiting Professor at Munich’s University of Applied Sciences (Fachhochschule, 1989–2000), a member of ABENS (Brazilian Association of Solar Energy), a Silver Member of ISES (International Solar Energy Society), and a member of ABNT's Commission for the Study of Solar Photovoltaic Energy Conversion Systems.

Trajano holds a PhD in Engineering for Photovoltaic Solar Systems from UFSC (Federal University of Santa Catarina), a Master’s in Technology from CEFET-RJ, has specialized in Technological Innovation and Industrial Organization at COPPE-UFRJ, and holds a degree in Electrical Industrial Engineering.

Mauro Sergio Crestani – Journalist, has covered the electrical energy sector for more than 30 years, writing stories and articles on production, transmission, distribution, and use of electricity in Brazil and worldwide, covering international congresses and exhibitions in South America, Europe and the USA. Editor of Eletricidade Moderna magazine since the 1990s and FotoVolt magazine since 2015, the latter dedicated to photovoltaic solar energy and energy storage.

Three exhibitions, one special exhibition, one mission: setting the stage for developing a clean and advanced energy industry in South America.

Read more about the finalists

What is the relevance of the Brazilian Northeast in regards to PV?